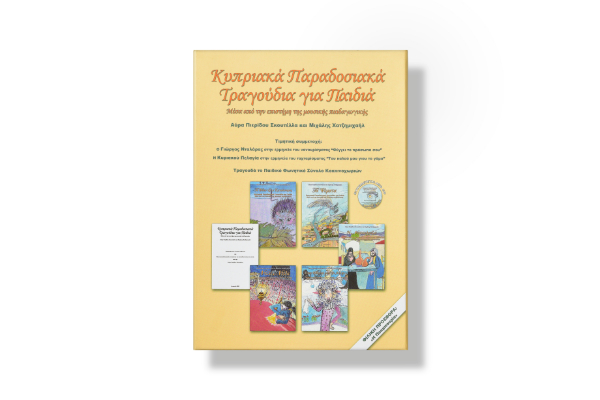 This pioneering publication presents for the first time to the Greek and Cypriot society and music education system a small part of the Cypriot traditional songs for young children implementing at the same time appropriate music teaching methodologies.
The publication might be used by (a) school teachers in kindergarten, pre-primary and primary school, (b) families, (c) media and (d) children.

The melodies and lyrics of the songs derive from the folkloric research of the Cypriot folk musician Michalis Hadjimichael in the area of Kokkinochória in the east coast of the island. Dr Avra Pieridou Skoutella took the responsibility to design the publication, devise the teaching methodologies, form the children’s choir and teach the songs and undertake the creation and final production of the publication.

Alongside important musicians and artists cooperated such as the composer Costas Cacoyiannis who orchestrated the songs, the illustrator Louisa Kaimaki who created the songbooks’ illustrations, the traditional singer Kyriakou Pelayia, the UNESCO ambassador of Goodwill the Greek singer George Dalaras and many others. In addition, 24 aged 8-12 children from different villages of the Kokkinochória area participated in the choir. They used to meet every week for more than 8 months to prepare the choir for the recording.

The production of the publication was possible with the generous support of local bodies in Kokkinochória. The prime sponsor was the Municipality of Paralimni along with several private local enterprises. Media sponsors were the Cyprus Broadcasting Corporation and the newspaper Politis.